Every Wednesday morning the area Veterans meet at Highway 105 Storage located at 13921 Highway 105 near Montgomery. This has been a tradition ever since the owner Jack McClanahan become involved with the Lone Star Honor Flight Program which started in 2007 and has sent over 500 veterans  for a one day trip to Washington D.C. to visit the World War II Memorial, Vietnam Wall and the Korean Memorial. The cost of over $400,00 was raised by the local community and through donations.

The Veterans have deemed the location as their headquarters.

The group started small but over the past year has grown. Last year Jack installed a 120 foot flag pole and a $1,600 30-foot by 60-foot flag that weighs over 100 pounds. Due to wear the flag had to be replaced.

Todays flag raising marked several important events. Thursday is one year since the first flag was installed. Today was the 100th meeting of the Veterans. Also the capture and death of Osama Bin Laden by the Navy Seals.

The flag was raised at 9am sharp. After breakfast was served the first Wednesday of each month by Buster Bowers, owner of Vernon’s Kuntry Katfish restaurant. The Veterans meet every week and when not having breakfast are treated to doughnuts and coffee.

The flag raised today was purchased by Pete and Paula Caldwell. It was purchased in memory of Pete’s father Alvin “Pappy” Caldwell, a Navy veteran who passed away in 2009. 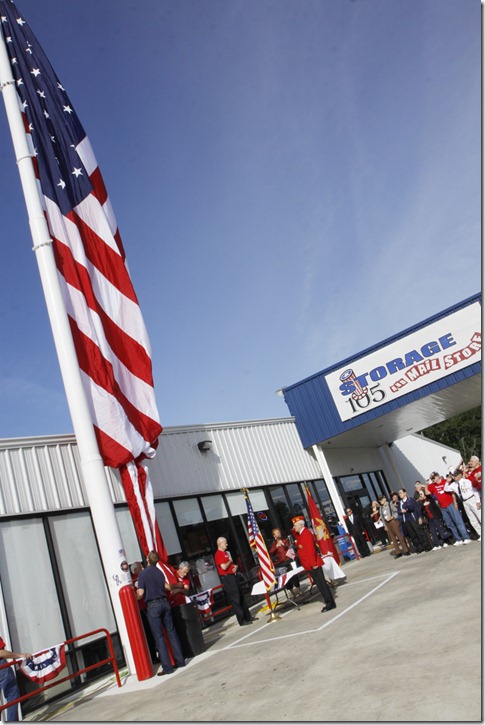 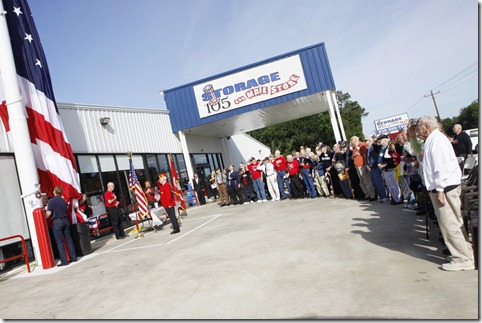