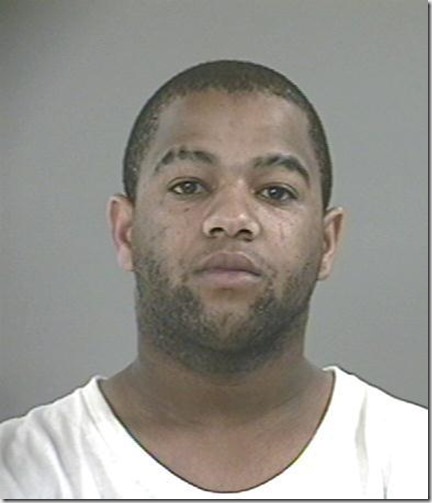 On May 1, 2006 Holmes and three others were heading to Houston when their car broke down at the Shell station at South Loop 336 and Interstate 45. Needing to continue their trip to Houston, Holmes walked next door and carjacked Thomas for his Cadillac and as Thomas fled the car was shot with a .22 caliber rifle. He was found dead a short time later in the alleyway. His female passenger was unharmed. Holmes then held up the drive thru demanding Tacos.
Two of his three companions ran off while the other remained on the scene and was arrested by Conroe Police.

Holmes then left out heading south in the northbound feeder when a Conroe Police officer spotted him and gave chase. A short distance further Holmes crashed the Cadillac and fled across the freeway on foot. He continued across the then driving range and into the woods near the San Jacinto River.
DPS Helicopters assisted Conroe Police as did Texas Department of Criminal Justice dogs.

The search continued through the daylight hours the next day before being called off.

He was remanded to custody of Conroe Police and a charge of Capital Murder landed him in the county jail on a $50,000 bond.

On April 7, 2006 Holmes was able to post the bond and was released but was arrested again for violating the terms of that release.
Once again he was put in the Montgomery County jail and once again posted a $75,000 bond.

On May 8, 2008 he was to appear in court to answer the Capital Murder charge. He didn’t show and has not been seen since.
Several reports of him being spotted have come into Conroe Police Department and the Sheriff’s Office resulting in some cases , SWAT being dispatched to attempt to take him into custody.
Conroe Police believe he may have drastically changed his appearance to avoid detection.
Crime Stoppers is offering a reward for Holmes.

This parking lot was the scene of another murder in 2004. That murder was on the west side of the parking lot when K-Mart still occupied it.