Showers and thunderstorms are expected Thursday ahead of and along a boundary. There is a slight chance of excessive rain in isolated locations if heavier rain manages to train over the same place. Additionally, there is a marginal chance that the strongest storms of the day may become severe, which would be capable of producing damaging wind gusts or even a brief tornado or two. Periods of rainfall, heavy at times, will persist through early Saturday morning.

Thanksgiving:
A boundary will cross Southeast Texas on Thursday (Thanksgiving), very slowly moving through the area Thursday afternoon through late Thursday evening. Showers and thunderstorms will accompany the disturbance itself, and there will be isolated to scattered showers and thunderstorms developing in the morning hours. Generally rainfall totals on Thanksgiving will be up to 1 to 3″ overall, but isolated rainfall totals of 5 to 7″ is possible if multiple storms move over the same area. Areas that see those higher rain totals may experience minor flooding or ponding in low lying areas and in areas of poor drainage. The threat for this is highest if and where multiple heavier showers and thunderstorms train over the same location. Recent rainfall accumulations and cooler November temperatures will also prime the ground for enhanced runoff, and WPC has given our area a marginal to slight risk of excessive rainfall.
The Storm Prediction Center has given most of the area a marginal risk for severe thunderstorms. Strong wind gusts are the main hazard, but an isolated tornado or two can’t be ruled out. 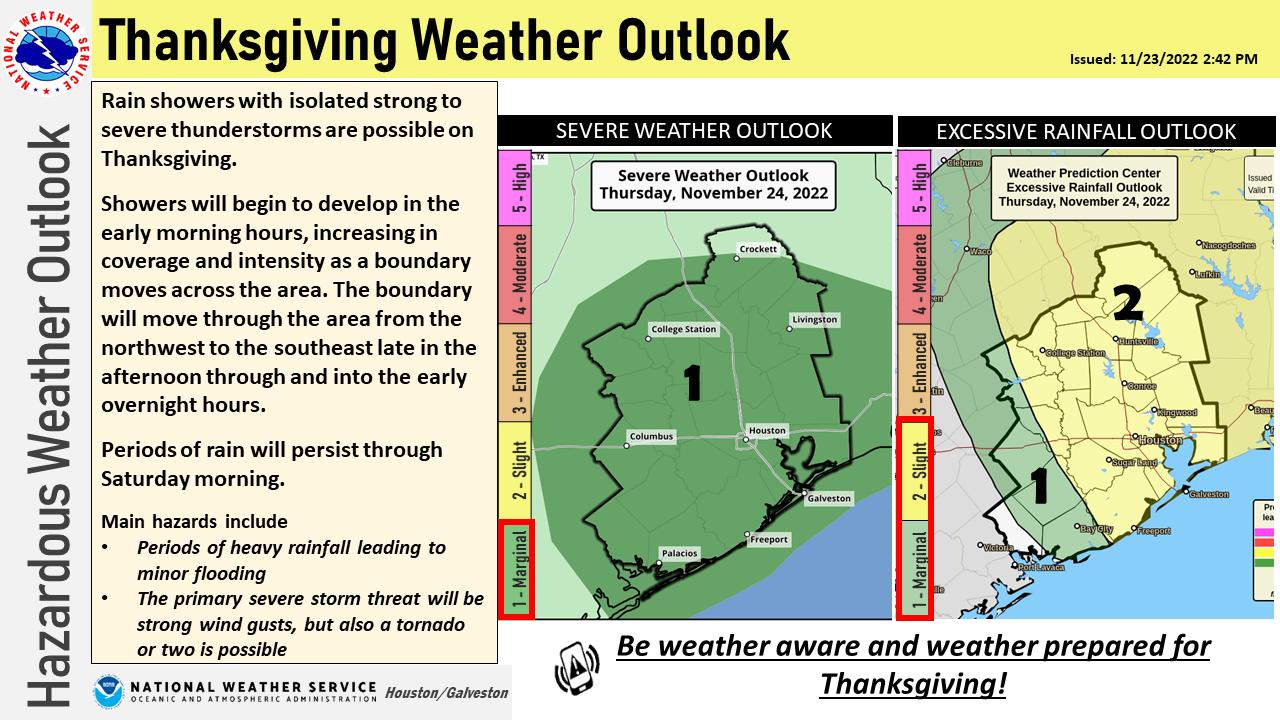 Friday into Saturday:
A slow-moving upper-level low will move in behind the cold front bringing additional showers and thunderstorms Friday afternoon through Saturday morning. Up to an additional 1 to 3″ is possible on Friday, and then again Saturday morning with locally higher amounts possible where training showers develop. This type of rainfall wouldn’t typically be an issue, but with the wet pattern we have been in recently, there may be some minor flooding or street ponding – especially in areas that receive heavy rainfall on Thanksgiving. WPC has expanded the Slight Risk for Excessive Rainfall to all of Southeast Texas on Friday. 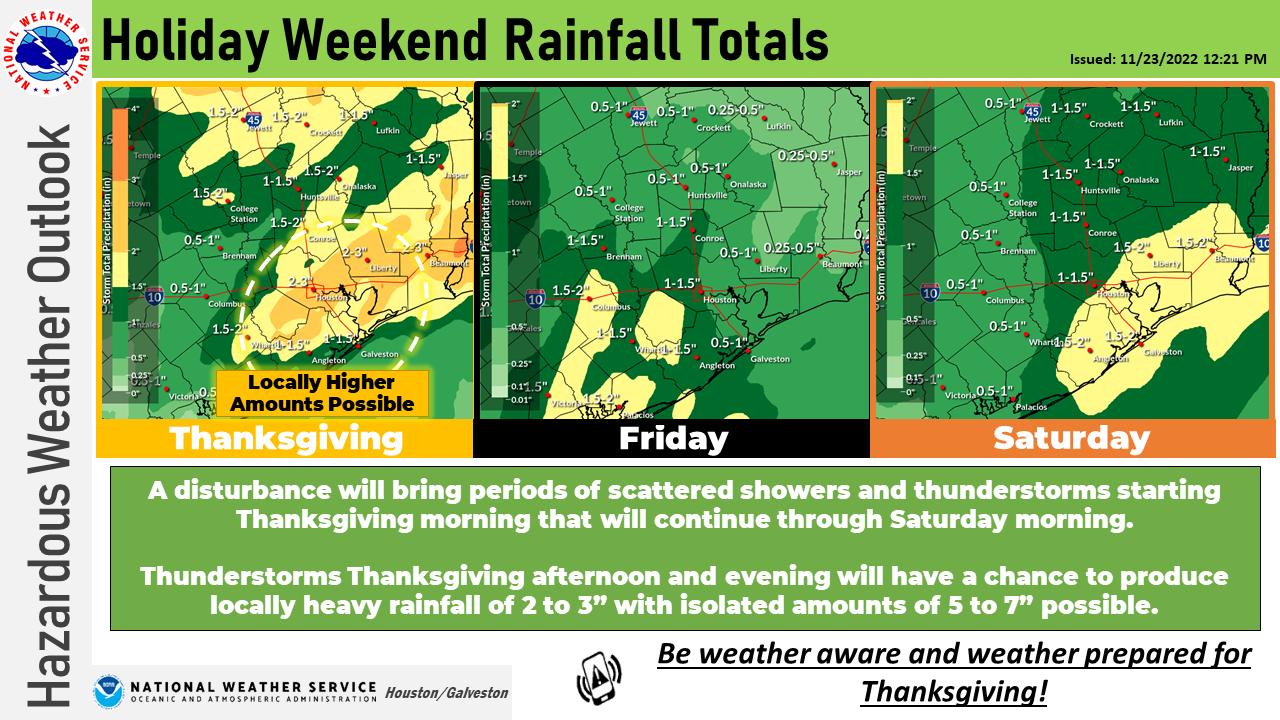 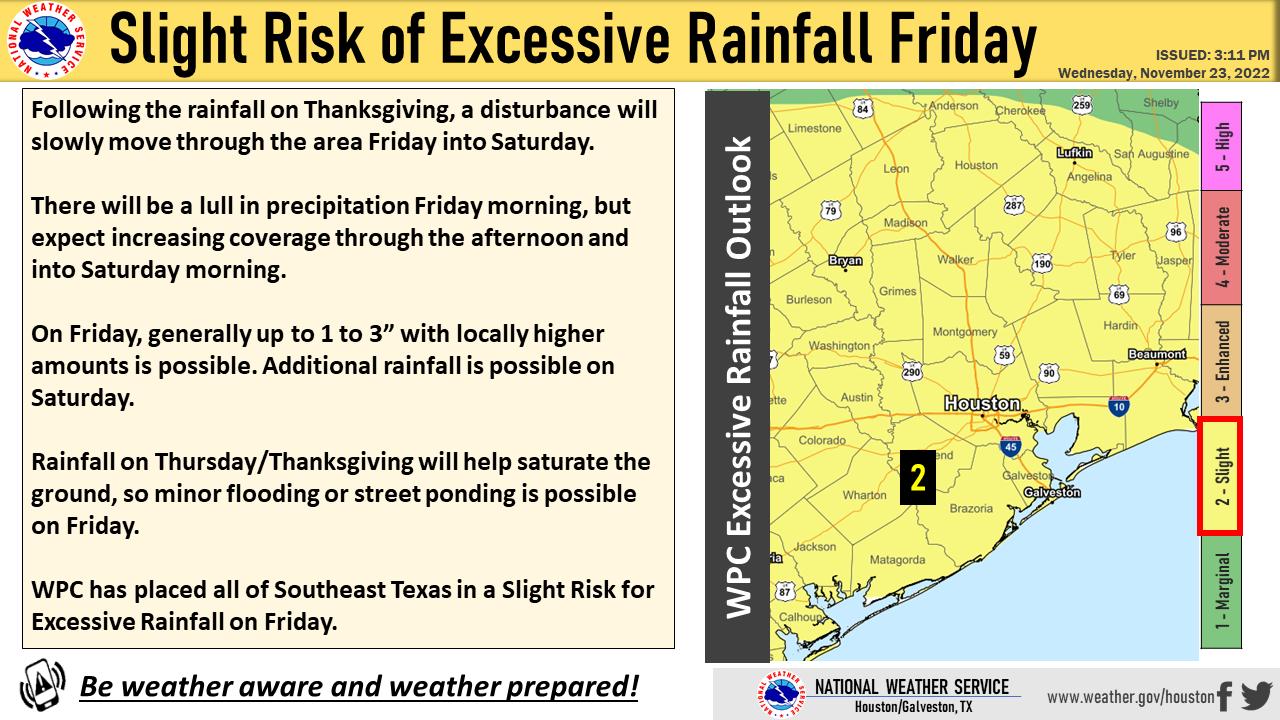 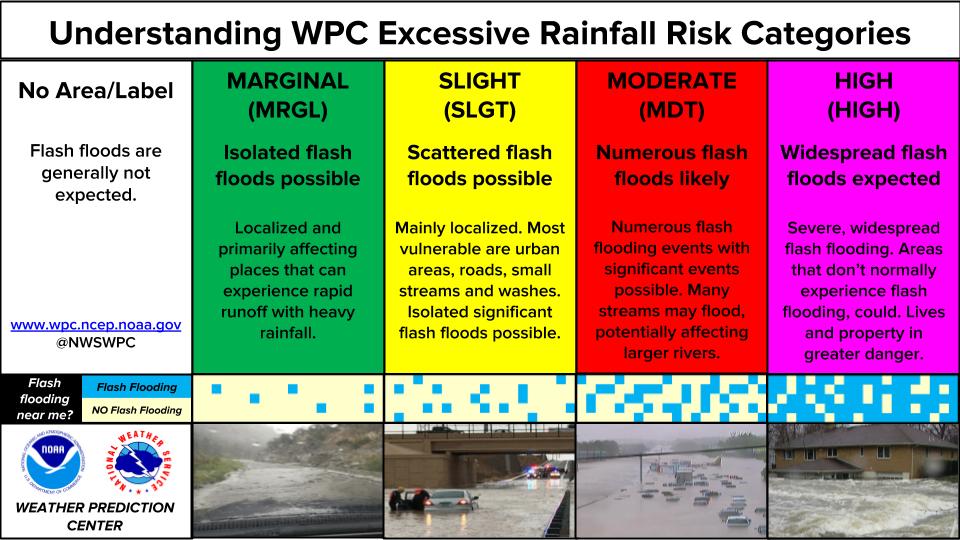 Urban Flash Flood Messaging
Heavy rainfall is forecast for portions of Southeast Texas, including highly urbanized areas like the Houston metropolitan area. Based on forecast conditions, NWS Houston will be utilizing the following urban flash flood messaging for this event:
– Drive with caution. Cars may flood in low-lying areas. Ponding on roadways may increase risk of hydroplaning.

– Pay attention to the weather. Monitor the NWS, your local media, HCFCD and other official weather information sources.
– Rain may move repeatedly across the same area, causing a rapid rise on creeks and bayous. However, creeks and bayous are not likely to exceed their banks