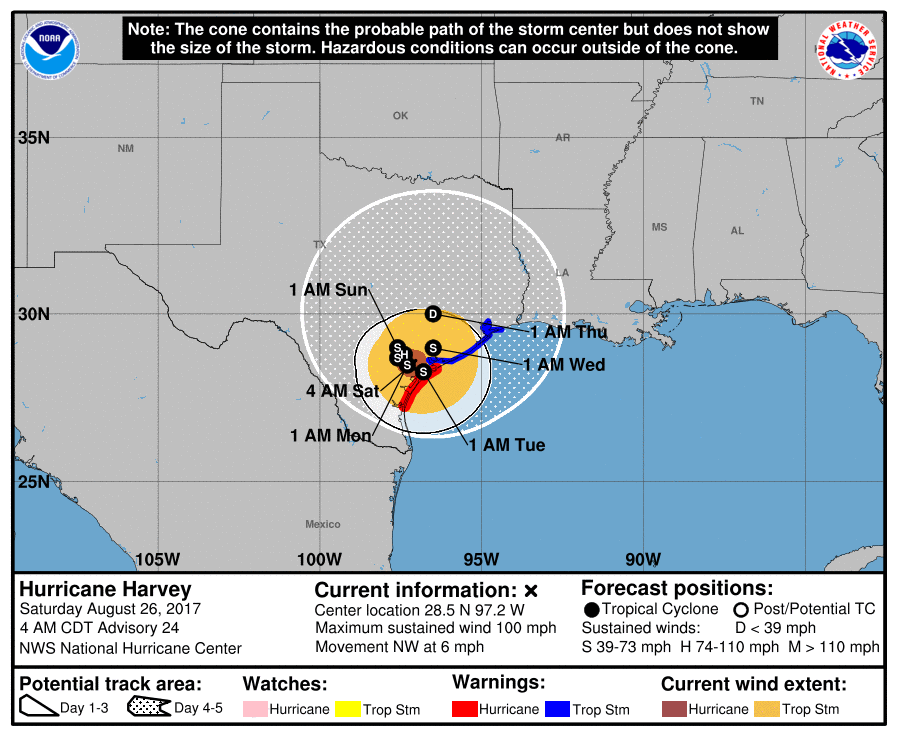 Hurricane Harvey has weakened to a Category 2 as it continues to push inland along the Middle Texas Coast. The primary impact from Harvey over Southeast Texas remains prolonged significant heavy rainfall that will induce extreme widespread flooding through at least the beginning of next week. Flash flooding has already begun across the southwestern portion of Southeast Texas. Tropical storm force winds are possible through around noon Saturday for the southwestern portions of Southeast Texas. With the strongest winds tonight, storm surge will be slow to recede through Sunday, particularly west of Freeport. Elevated tide levels will continue through Tuesday. Tornadoes will continue to form this morning, especially across the coastal counties and first inland tier. Again, the primary emphasis and greatest threat to life and property will be the extreme rainfall amounts that will likely lead to a potentially catastrophic and prolonged flash flooding event over the coming 3 to 5 days.

Potential impacts from the flooding rain will continue to unfold across Southeast Texas over the next 3 to 5 days. Remain well guarded against life-threatening flood waters having possible catastrophic impacts. If realized, these impacts include:

– Rivers and tributaries may overwhelmingly overflow their banks in many places with deep moving water. Small streams, creeks, canals, and ditches may become raging rivers. Flood control systems and barriers may become stressed.

Potential impacts from the main wind event are now unfolding across the Matagorda Bay area. Remain well sheltered from life-threatening wind having possible extensive impacts. If realized, these impacts include:

– Considerable roof damage to sturdy buildings, with some having window, door, and garage door failures leading to structural damage. Mobile homes severely damaged, with some destroyed. Damage accentuated by airborne projectiles. Locations may be uninhabitable for weeks.

– Many large trees snapped or uprooted along with fences and roadway signs blown over.

Potential impacts from the main wind event are also now unfolding across the southwestern portion of Southeast Texas. Remain well sheltered from life-threatening wind having possible limited to extensive impacts.

Potential impacts from the main surge event are now unfolding across the Upper Texas Coast, primarily west of Freeport. Remain well away from life-threatening surge having possible devastating impacts. If realized, these impacts include:

– Areas of inundation with storm surge flooding accentuated by waves. Damage to several buildings, mainly near the coast.

Potential impacts from the main surge event are also now unfolding across the Upper Texas Coast east of Freeport. Remain well away from life-threatening surge having possible significant impacts.

Potential impacts from tornadoes are still unfolding across Southeast Texas, particularly across the coastal and second tier counties. Remain well braced against tornadoes event having additional limited impacts. If realized, these impacts include:

– The occurrence of isolated tornadoes can hinder the execution of emergency plans during tropical events.

– A few places may experience tornado damage, along with power and communications disruptions.

IMMINENT/ONGOING PHASE – Do not return to evacuated areas until hazardous winds diminish and flood waters abate.

-Now is the time to remain safely sheltered from the storm. Stay inside and away from windows. Listen for updates and be ready in case you lose electrical power. Locate your battery powered radio and flashlight from your Emergency Supplies Kit. Keep these items close.

-During the peak of the storm, keep your shoes on and rain gear handy. Boots and tennis shoes offer the best foot protection if you become unexpectedly exposed to the elements.

-Continue to keep your cell phone well charged for as long as possible. If you lose power, use it more sparingly and mainly for personal emergencies and check-ins. Do not overload communications systems with idle chatter.

-Do not venture outside while in the eye of a hurricane. Within the eye, weather conditions may temporarily improve which can be misleading. Once the eye passes, the wind will change direction and return to dangerous speeds. Heavy rain will also return. Be smart and remain safely hidden from the storm.

-Do not be a thrill seeker or risk your life for senseless photos or videos. Be wise and avoid becoming another statistic.

-Be ready to move to the identified safe room if your home or shelter begins to fail. Quickly move to an interior room on the lowest floor.

-Put as many sturdy walls between you and the storm as you can. Protect your head and body.

-When major hurricanes make landfall, extreme winds bring a tremendous threat to life and cause devastating to catastrophic damage. During landfall, listen for extreme wind warnings which indicate the exact timing and location of these incredible life-threatening winds. If issued for you area, move to the safest place within your home or shelter. Take the same life-saving actions as if it were a violent tornado.