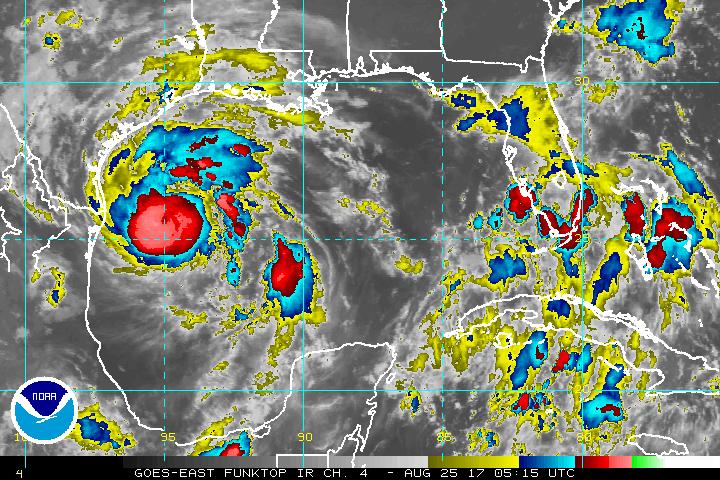 **HARVEY EXPECTED TO STRENGTHEN AS IT MOVES TOWARDS THE TEXAS COAST**

* CHANGES TO WATCHES AND WARNINGS:
– None

Category 1 Harvey is forecast to continue strengthening and will most likely become a major hurricane before it makes landfall somewhere along the Middle Texas Coast Friday. The primary impact from Harvey still remains very high rainfall amounts that will induce extreme widespread flooding across southeastern Texas. Tropical storm force winds, with occasional hurricane force wind gusts, and storm surge will occur along the coast as early as late Friday afternoon and persist through Tuesday. Harvey`s wind field has expanded, and therefore higher storm surge can be expected along the Upper Texas coastline. Coastal flooding will remain an issue throughout the weekend and possibly into next week as strong onshore winds will keep water piled up along the coastline. Again, the primary emphasis is on the high rainfall amounts that will likely lead to widespread and prolonged flash flooding.

* FLOODING RAIN:
Protect against life-threatening rainfall flooding having possible devastating impacts across much of southeast Texas. The highest threat is for areas along and south of a Columbus to Houston line. Potential impacts include:
– Extreme rainfall flooding may prompt numerous evacuations and rescues.
– Rivers and tributaries may overwhelmingly overflow their banks in many places with deep moving water. Small streams, creeks, canals, and ditches may become raging rivers. Flood control systems and barriers may become stressed.
– Flood waters can enter numerous structures within multiple communities, some structures becoming uninhabitable or washed away. Numerous places where flood waters may cover escape routes. Streets and parking lots become rivers of raging water with underpasses submerged. Driving conditions become very dangerous. Numerous road and bridge closures with some weakened or washed out.

Protect against life-threatening rainfall flooding having possible limited to extensive impacts across areas north of Columbus to Houston.

* WIND:
Protect against life-threatening wind having possible devastating impacts across Matagorda Bay from Port O`Connor to Sargent. Potentialimpacts in this area include:
– Structural damage to sturdy buildings, some with complete roof and wall failures. Complete destruction of mobile homes. Damage greatly accentuated by large airborne projectiles. Locations may be uninhabitable for weeks or months.
– Numerous large trees snapped or uprooted along with fences and roadway signs blown over.
– Many roads impassable from large debris, and more within urban or heavily wooded places. Many bridges, causeways, and access routes impassable.
– Widespread power and communications outages.

* TORNADOES:
Protect against a tornado event having possible limited impacts across all of Southeast Texas. Potential impacts include:
– The occurrence of isolated tornadoes can hinder the execution of emergency plans during tropical events.
– A few places may experience tornado damage, along with power and communications disruptions.
– Locations could realize roofs peeled off buildings, chimneys toppled, mobile homes pushed off foundations or overturned, large tree tops and branches snapped off, shallow-rooted trees knocked over, moving vehicles blown off roads, and small boats pulled from moorings.

* EVACUATIONS:
For those under evacuation orders, leave as soon as practical with a destination in mind. Gas up your vehicle well ahead of time. Be sure that you take all essential materials from your emergency supplies kit. Let others know where you are going and when you intend to arrive.

If evacuating the area, stick to prescribed evacuation routes. Look for additional traffic information on roadway smart signs and listen to select radio channels for further travel instructions. Drivers should not use cell phones while operating vehicles.

If you are exceptionally vulnerable to wind or water hazards from tropical systems, consider voluntary evacuation, especially if being officially  recommended. Relocate to a predetermined shelter or safe destination.

If evacuating away from the area or relocating to a nearby shelter, leave early before weather conditions become hazardous.

* OTHER PREPAREDNESS INFORMATION:
Now is the time to bring to completion all preparations to protect life and property in accordance with your emergency plan.

Outside preparations should be wrapped up as soon as possible before weather conditions completely deteriorate. Any remaining evacuations and relocations should be expedited before the onset of tropical storm force wind.

If you are relocating to safe shelter, leave as early as possible. If heading to a community shelter, become familiar with the shelter rules before arrival, especially if you have special needs or own a pet. Take essential items with you from your Emergency Supplies Kit. Check the latest weather forecast before departing.

Failure to adequately shelter may result in serious injury or loss of life. Always heed the advice of local officials and comply with any orders that are issued. Remember, during the storm 9 1 1 Emergency Services may not be able to immediately respond if conditions are unsafe. This should be a big factor in your decision making.

Check-in with your emergency points of contact among family, friends, and workmates. Inform them of your status and well-being. Let them know how you intend to ride out the storm and when you plan to check-in again.

Keep cell phones well charged and handy. Also, cell phone chargers for automobiles can be helpful after the storm. Locate your chargers and keep them with your cell phone.

In emergencies it is best to remain calm. Stay informed and focused on the situation at hand. Exercise patience with those you encounter. Be a Good Samaritan and helpful to others.

If relocating to a nearby shelter or to the home of a family member or friend, drive with extra caution, especially on secondary roads.
Remember, many bridges and causeways will be closed once higher winds arrive. Also, if you encounter water covering the road, seek an alternate route. Always obey official road signs for closures and detours.

If you are a visitor and still in the area, listen for the name of the city or town in which you are staying within local news updates.
Be sure you know the name of the county or parish in which it resides. Pay attention for instructions from local authorities.

Closely monitor NOAA Weather radio or other local news outlets for official storm information. Be ready to adapt to possible changes to the forecast.

The next local statement will be issued by the National Weather Service in Houston/Galveston TX around 430 AM CDT, or sooner if
conditions warrant.