VIDEO EVENTS FOR YEARS PAST

JANUARY 17, 2011
CRASH ON SORTERS ROAD REQUIRES LIFE FLIGHT FOR A TEEN
For the second time in the past few days, there has been a serious accident involving a teenager. Monday evening a 16-year-old female from Humble was southbound on Sorters Road in her silver Honda she not wearing a seatbelt. As she approached the curve near Mccoy she left the roadway for unknown reasons, struck an Oak tree and began flipping. The vehicle came to rest almost 250 feet from where she left the road.
MCHD and Porter Fire Department responded to the scene. Due to her critical injuries, PHI Air Medical was dispatched to the scene and transported her to Hermann Hospital in Houston.
Trooper Zandt who worked the accident said she could not find a reason the vehicle left the roadway at such an angle.
Sorters Road was closed for over an hour as the investigation continued.
ORIGINAL STORY AND PHOTOS

JANUARY 17, 2012
CAR CRASHES INTO HOUSE ONNAVAHO DRIVE
An 18-year-old Willis man is was flown from SH 105 at Navaho by PHI Air Medical to Hermann Hospital in Houston Thursday morning.
Just after 3 a.m., a motorist informed a Montgomery County deputy that a 2008 silver Mustang had left the roadway and struck a building. Deputies were seconds away when they found the scene.
The driver of the vehicle was no wearing a seatbelt and was ejected from the vehicle. He suffered severe head trauma.
Trooper Williams with DPS is still investigating the crash but has determined the Mustang was eastbound on SH 105 at a high rate of speed when he left the roadway, went between a signpost and guardrail. He continued by crossing over two driveways, crossed Navaho Street and then went through a cyclone fence. It was at that point that he struck two concrete pillars went through another cyclone fence and struck the back of the shopping center anchored by Fajita Jacks.
The driver has been identified as Taylor Reid Chambers, 18, a 2012 Willis High School graduate who was due to start US Navy basic training next month.
The only damage to the building was a cracked concrete wall.
Debris was scattered over a large area.
Lake Conroe Fire Department assisted MCHD in stabilizing the driver prior to flying him.

JANUARY 17, 2013
FATAL CRASH GENE CAMPBELL DRIVE
A 22-year-old female from Spring was northbound on Gene Campbell near Industrial just after 10 a.m. Thursday morning. For unknown reasons, she had gone into the southbound lanes almost striking a Ford Focus which was able to take evasive action and miss the near head-on collision. Vilza Perez, 23 of New Caney who was behind the Ford Focus was not able to avoid the Honda Civic and was struck head-on.
Perez was transported to the hospital in stable condition by MCHD.
The female driver in the Honda died on the scene and had to be cut out of the vehicle by the New Caney Fire Department.
Judge Metts ordered Eickenhorst Funeral Home to transport the female to the Montgomery County Forensic Center for autopsy.
Gene Campbell was closed for almost 3 hours as DPS investigated the crash. Many trucks bound for the Walmart Distribution Center had to be rerouted.

JANUARY 17, 2013
30 YEARS FOR DOPE ON BUS
Montgomery County prosecutors were satisfied with the outcome of a major drug trafficking trial that wrapped up late Thursday afternoon in the 410th District Court with Judge Suzanne Stovall filling in for Judge Mayes.
Assistant District Attorneys Rob Freyer and Vince Santini presented evidence against 29-year-old Ramiro Trevino Jr., of San Benito, Texas, a repeat offender who has fared well with light sentences in other counties and states but has now learned a hard lesson about Montgomery County that Freyer and Santini hope will make others like Trevino take notice.
On June 10, 2012, Deputy David Everton of the Montgomery County Sheriff’s Office stopped an El Expresso passenger bus, with almost 40 passengers en route from Houston to Chicago. The bus was headed north on US 59 and had a defective tail lamp. Freyer said Everton immediately noticed the driver behaving suspiciously, as well as a particular passenger, later identified as Trevino.
Everton obtained consent from the driver to search the bus and other units responded to assist. Where Tervino was sitting, in a sleeping area, Splendora Police Officer Hernandez found a hidden compartment cut into the floor complete with fresh sawdust. In that compartment, 6 kilos of cocaine, 2 kilos of brown heroin and almost 90 grams of black tar heroin, which expert testimony revealed had a wholesale value of approximately $400,000, but the street value was far more, as Freyer reaffirmed after the trial.

JANUARY 17, 2014
CRASH I-45 NORTHBOUND AT SH 242
At approximately 5 pm the driver of a Ford F-150 pickup was involved in a minor accident in the city of Shenandoah. The male driver fled the scene heading toward Interstate 45 driving reckless and speeding. Multiple calls came into 911 reporting the driver.
Moments later he entered the freeway northbound just north of Research and crossed all lanes of traffic to the left shoulder striking the concrete wall. The driver continued at a high rate of speed northbound on the left shoulder until the shoulder narrowed back to the main lanes in the construction area. It was at that point that he slammed into the rear of an Avalon occupied by two adults and a child. The truck then crossed all the lanes back to the right shoulder crashing into the concrete wall.
When emergency crews arrived they found the driver lying outside of the vehicle on the ground. At first, it was thought he was ejected, however, there was no damage to the driver door or glass in the vehicle.
Troopers speculate the driver saw the wall coming up and feared going over it at which time the driver jumped out of the vehicle.
He was flown by PHI Air Medical to Memorial Hermann in Houston in critical condition with a head injury.
The freeway reopened at 7:15 pm but not before backing traffic up well into Harris County and causing gridlock throughout The Woodlands as motorists tried to avoid the freeway.
Additional details and names will be posted as soon as available,
The three occupants of the Avalon were transported to Memorial Hermann in The Woodlands.

JANUARY 17, 2015
OLD TOWN SPRING CRASH-PAINTED PIG
Just after midnight, Spring Fire Department responded to a reported major accident involving a van and building in Old Town Spring. They arrived at the Painted Pig Antique and Gift Shop at 118A Midway to find a Chevrolet Astro van had struck not just the building but a very large oak tree. The vehicle also broke the main water line for Old Town Spring.
Harris County Sheriff’s Office responded and took the male driver into custody for suspicion of impairment.
The building suffered minor damage.
According to witness walking down the street a block away, the van passed them at a rate of speed and then appeared to just have lost control
ORIGINAL STORY AND PHOTOS

JANUARY 17, 2016
FATAL CRASH MASON ROAD AT CLAY
On Sunday, January 17, 2016, the Bobby I Arinze was operating a black in color BMW 320i northbound on Mason Road. The Complainant ran a red signal light controlling the intersection of Mason Road and Clay Road. 4000 Mason Road deadens into Clay Road. The Bobby I Arinze disregarded turn marks on Mason Road just south of the stop bar. The Bobby I Arinze continued northbound through the intersection left the roadway and entered a grass-filled pasture. Upon entering the grass-filled pasture the Complainant’s BWM struck a tree continued to travel north striking another tree before coming to rest facing to the south right side up. The Bobby I Arinze died from injuries sustained during this crash. This case is under investigation by the Harris County Sheriff’s Office Traffic Enforcement Division.

JANUARY 17, 2017
MOBILE HOME FIRE IN HAZY HOLLOW-HONEY SUCKLE DR
Just before 9 pm Magnolia Fire Department received a call for a mobile home fire on Honeysuckle Drive in the Hazy Hollow subdivision. While enroute there was a possibility of at least one person trapped. That however changed within minutes of their arrival when that family member was found to have exited the home. Firefighters went on scene with two single mobile homes heavily involved in fire. Two outbuildings were threatened but saved by firefighters. It was learned that 8 persons had been in the home when the fire broke out. There were no injuries. Magnolia was assisted by Needham Road Fire Department and Tomball Fire Department. The Montgomery County Fire Marshal’s Office will be investigating the blaze.

JANUARY 17, 2019
CALVARY ROAD HEAD-ON CRASH
Just before midnight, Thursday DPS was dispatched to a head-on crash with a possible fatality on Calvary Road about a mile west of I-45 in the Willis area. Units arrived on the scene to find 3 vehicles with heavy damage and victims trapped. North Montgomery County Fire worked first on a Kia Rio in which a female driver and an infant were entrapped. They were transported in stable condition. The female driver suffered severe leg injuries. They then went to work on a Land Cruiser with a female driver and a male passenger. They were also transported in stable condition. The driver of the Dodge Journey was critical and transported to the hospital. According to DPS the females’ driver of the Kia was eastbound on Calvary Road. The Land Cruiser was westbound on Calvary. The driver of the Dodge Journey was traveling at a high rate of speed passing the Land Cruiser just past the bridge. As he did this he slammed into the Kia head-on. The KIA was thrown to the ditch on the south side of the roadway. The Journey came to rest in the middle of the road. The Land Cruiser left the roadway and traveled along the fenceline ripping it out. The Land Cruiser struck a utility pole snapping it off at its base. The pole was then ripped away from the 7,500 volt overhead powerlines. The pole fell to the ground without the wires falling or power being disrupted. Company Officials with the power company said they had never seen that before. The Montgomery County District Attorneys Office Vehicular Crimes Unit is assisting in the investigation. They are trying to determine if the driver of the Dodge was impaired.

0 0
Previous : MONTGOMERY COUNTY MOST WANTED
Next : ‘You tried to kill her’: Man attacks Spring woman with machete
Scott Engle 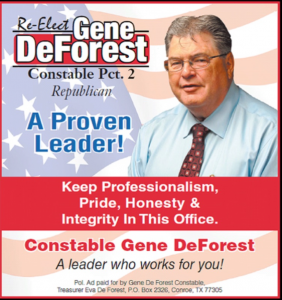