WALLER COUNTY, Texas (KTRK) — A Hempstead ISD bus was taking students, who have special needs, home Friday afternoon when it rolled over and crashed in Waller County killing one person, according to authorities.

Officials with the Texas Department of Public Safety were called at about 12:30 p.m. to the scene on Holik Road at FM 1887.

In a tweet, DPS troopers confirmed an adult was pronounced dead at the scene. During a briefing at about 4 p.m., officials confirmed 59-year-old Abigail Ragston, a bus aide, was killed.

ABC13 spoke with Ragston’s husband, Frederick, at the scene.

“She was doing what she loved to do,” he said. I don’t understand it. She loved those kids.”

Frederick said she had been working for the district for 20 years. She also leaves behind four children and seven grandchildren.

DPS officials said a bus driver and four students were also on board during the incident.

The district sent the following statement to ABC13:

“We are aware of a tragic bus accident involving one of our district school buses. The district is cooperating fully with law enforcement as this matter is investigated. At this time, out of respect for those involved, we cannot give further details. We ask that you keep our Bobcat family in your thoughts.” 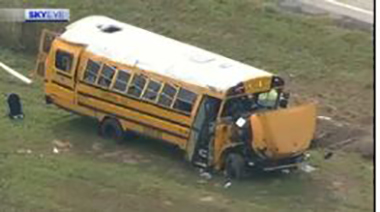