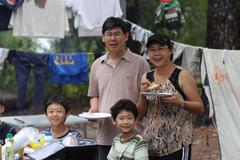 On the one year anniversary since the Sun family was found murdered in its Cypress-area home, the Harris County Sheriff’s Office reminds the public that information is still being sought in the case as the killer(s) remains at large. A $70,000 reward still stands.
According to investigators, Maoye Sun, his wife Mei Xie, and their two boys, Titus and Timothy were murdered in their home at 14015 Fosters Creeks Drive in northwest Harris County between the late hours of January 24, 2014 and the morning of January 25. Their bodies were not found until January 30 when deputies were asked to conduct a welfare check.
HCSO investigators continue to pursue any and all tips, and ask for the public’s help to bring closure to such a horrific tragedy.
“We have not forgotten the Sun family and neither should you,” said Sheriff Adrian Garcia. “We continue to ask for your help in this case and for you to come forward with any information you may have about what you saw, heard, or know of that day one year ago,” he added.
Billboards reading “WHO KILLED THE SUN FAMILY? $70,000 REWARD”, along with a photo of the Suns, continue to appear throughout the Houston-area. Clear Channel Outdoor has generously donated the billboard space for the past year to keep the message alive.
Anyone with information related to this case is asked to call Crime Stoppers of Houston at 713-222-TIPS, or send an anonymous tip via iWatchHarrisCounty.
See something? Say something!
iWatchHarrisCounty is the HCSO’s free mobile phone app that allows the public to report suspicious persons and/or activity anonymously, anywhere, any time.
For more information please visit www.iWatchHarrisCounty.com.
We watch Harris County and so should you.