Corporal Byron Dickson was shot and killed from ambush at the Blooming Grove Barracks in Pike County, at approximately 11:00 pm.Friday.
Corporal Dickson and another trooper were both outside of the barracks during a shift change when they were shot by an unknown assailant who remains at large.
Corporal Dickson served with the Pennsylvania State Police for seven years. He is survived by his wife and two sons.

Please contact the following agency to send condolences or to obtain funeral arrangements: 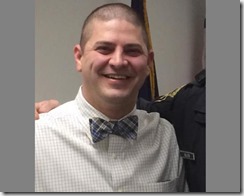