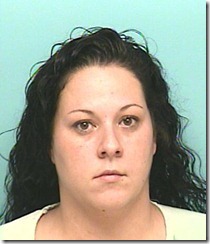 On Thursday afternoon, a Montgomery County Precinct 4 Deputy Constable arrested a nurse on multiple felony drug related warrants and three other warrants at her place of employment at Pine Shadow Retreat Nursing Home in Porter.

Amber Leigh Fox (a.k.a. Amber Leigh Miller), 33, of Porter was arrested on 5 Capias warrants after a Montgomery County grand jury indicted Fox on 4 counts of Fraudulent Possession of a Controlled Substance Prescription and 1 count of Engaging in Organized Crime. She also had two outstanding Precinct 4 warrants for Display Fictitious License Plate and Failure to Appear.

A tip led to Fox’s arrest while on-duty at the nursing home. Pct. 4 Constable Kenneth “Rowdy” Hayden said the situation was unsettling on many levels.

“It’s disturbing to find someone who’s been indicted on five felony drug charges is a nurse, but it’s worse to learn she’s employed at a nursing home,” Constable Hayden said, “And this was not even the first time we’ve arrested Ms. Fox.”

Bond was set at $75,000. As of this writing, Fox remains in the Montgomery County Jail.