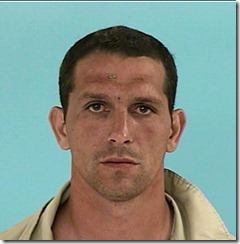 A 37 year-old man was sentenced to 35 years in prison Tuesday for leading police on a high-speed chase.  A Willis Police Department Officer saw Anthony Hodder of New Waverly leave a possible drug deal in progress and saw him driving a motor vehicle with an expired registration while running a stop sign on May 22 of last year.  As soon as Officer Bryan Skero turned on his emergency lights, Hodder hit the gas and began to flee through the streets of Willis, down Highway 75, and ultimately onto Interstate 45 at speeds ranging from 90 to 140 mph.

The chase occurred in broad daylight around the lunch hour, and featured Hodder making high-speed, side-slipping turns in front of a daycare facility, doing 90 mph through a school zone, and running many motorists off the road as he passed them along a tight, winding and two-lane section of Highway 75.  A State Trooper attempted to trap Hodder and spike his tires before he made it on to Interstate 45, but Hodder dodged around the trap by going backwards up a one-way exit ramp from the freeway, then cutting across the grass and medians to reach 45.

Police chased him for another 4 miles at speeds up to 140 mph before Hodder took to off-roading in the grass on the side of the highway, ultimately blowing a tire and cracking his radiator before crashing into a gully.  Even then, the defendant bailed out of his car and began running through the woods.  With the cooperation of multiple agencies, Hodder was located and pulled from the woods by the Walker County Sheriff’s Office roughly half an hour later.

Hodder initially pled not guilty to evading arrest in a motor vehicle before Judge Mary Ann Turner, who heard the case for the 359th District Court.  After a jury was selected and only 20 minutes of evidence was put on by Assistant District Attorneys Jason Horn and Darla Faulkner, Hodder changed his plea to guilty and also pled true to the allegation that the manner in which he drove his car made it a potential deadly weapon.     “If you run from the police and start a car chase in Montgomery County, we will end it, and you will be held accountable,” Horn explained.

During a brief punishment trial to the judge, Hodder admitted to his entire criminal history, which included imprisonments for burglary of a habitation, burglary of a building, and felony theft, as well as multiple misdemeanor thefts and an assault.  His history elevated him to a habitual offender status, making the range of punishment 25-99 years or life in prison, and Judge Turner sentenced him to 35.

District Attorney Brett Ligon stated “The citizens of this county cannot tolerate individuals who drive recklessly and endanger the lives of other innocent motorists on the road, and neither will we.”  Ligon further stated that “this case verifies the use of traffic enforcement to apprehend dangerous criminals who have no regard for the law or safety of others.”