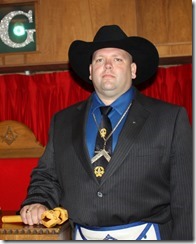 Roman Forest Police Chief Stephen Carlisle wears many hats, but it was a cowboy hat he wore when he was recently installed as Worshipful Master of Sam B. Crawford Masonic Lodge #1418 in New Caney. Carlisle was honored to have RW Tommy Griffin, Past Grand Master, Grand Lodge of Texas as Installing Officer and John Kelley, PM as Installing Marshal. Worshipful Master is the highest office of a local lodge and Carlisle has held every other local office over the years as he prepared to become Worshipful Master.

Stephen Carlisle32° has more to his masonic portfolio. To name a few, he is a 32nd Degree Mason, Master of the Royal Secret. He is also a Shriner and is currently the Vice-President of the New Caney Shrine Club whose primary mission is to raise money to support the Shriner’s Hospitals for Children Burn and Orthopedic centers who provides services to children at no charge. Sir Knight Stephen Carlisle is also a Knights Templar of the Houston Commandry.

In a rare presentation, Worshipful Master Stephen Carlisle was surprised and honored to receive the cowboy hat worn by a Past Worshipful Master, J.J. Cater, that was presented by J.J. Cater’s widow, Sister Evelyn Cater. After a moment to recover from an emotional presentation, Carlisle said that it is comforting to know that he will be honoring a great Past Worshipful Master every time he opens the Lodge wearing the hat of a man that he truly respected and misses, Jasper Cater. Carlisle also ended with a special thanks to Past Grand Master Tommy Griffin, Installing Officer; Past Master John Kelly, Installing Marshall; Chris Parr, fajita dinner; Sir Knight Tony Bass, Flag Presentation; Montgomery County Police Reporter Jamie Nash, Photographer; and his wife Sister Laura Carlisle, Decorator.

Freemasonry is a fraternal organization that predates the United States and is built upon the principles of honor and integrity, promoting loyalty, morality and good citizenship. Masons, though not always publicly identified as such, have played a vital role in American history. Many of the Founding Fathers were Masons, including George Washington, James Madison, Thomas Jefferson, Benjamin Franklin and John Hancock. Freemasonry continues to be well-represented in local and national leadership through the present day.

Freemasonry sprang from the ancient guilds of stone masons who built castles and cathedrals, and were influenced by the Knights of Templar – a group of Christian warrior monks formed in 1118 to provide protection for those making a pilgrimage to the Holy Land. Helping others remains part of their moral and ethical code.

Despite being a widespread and large organization in the US, Freemasonry continues to be the target of urban legend and misconception. This is probably due, at least in part, to the fact that Freemasons do not recruit members. Actually, they are forbidden from asking anyone to join based on the principle that Freemasonry is “making a permanent life commitment to live in certain ways, such as to live with honor, integrity, and to be willing to care about others, and have trust in each other” and no one should be persuaded or pressured to make that decision.

Instead, prospective members ask to join. A common masonic saying is, “to be one, ask one.” Roman Forest Police Chief and Worshipful Master Stephen Carlisle is glad he did, and is honored and humbled by his new position. 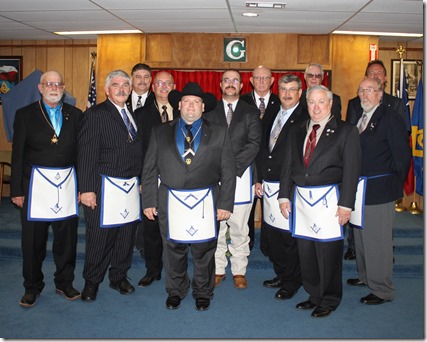