Friday night as two Splendora Officers were on routing patrol southbound on US 59 when a vehicle passed them at 85 mph. When the officers attempted to stop the vehicle the driver exited the freeway across the grass median at East River.

A pursuit was initiated. The driver continued east on East River at over 100 mph. Then after several turns made his was back to US 59. The pursuit continued north on US 59 to Gladstell. They then traveled east on Gladstell to FM 1010. They continued the pursuit north on FM 1010 until the driver turned onto Loop 105. It was at this point two white males fled into the woods.

A DPS helicopter was dispatched to the scene. In addition Montgomery County Precinct 4 Constables responded with a a tracking dog. DPS and Liberty County also assisted in sealing the area off which was very heavily wooded. After about two hours the search was called off. The vehicle was impounded and an investigation will continue. 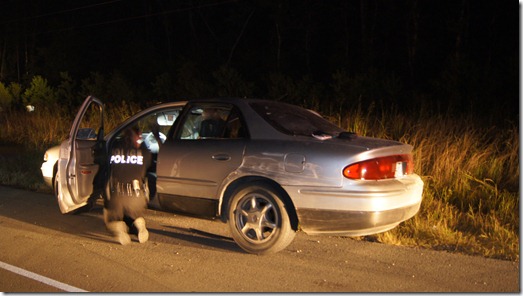