Constable David Hill spent the day Monday with Stephen Jurgella one of the few who started a program called Santa’s Elves. The group formed the non-profit organization after the fires this summer.

On December 9, 2011 they quickly organized a golf tournament at High Meadow Golf Course. They had hoped for some to show and had set a goal of $10,000. Within days of the announcement 158 teams had formed more than the 140 limit at High Meadow but they worked around it. By the end, $72,000 was raised.

One of those stops by Santa Elf Jurgella was at Consolidated phone company in Conroe. They were there to locate Bobby Rogers, an employee who is now caring for his two grandchildren after their father was killed in an accident last month on Highway 150 just outside Willis. His vehicle struck a horse on the roadway.

As Bobby walked out of his office and saw Constable Hill he threw up his hands jokingly. Jurgella then presented him with a check for $5000 for the children’s scholarship fund.

Bobby was not the only recipient,  Tammy Lewis, a secretary at Williams Elementary School. She has 3 children and lost her home in Remington Forest to the fire. She had assumed a General Warranty Deed and paid her house payment, insurance and taxes all together. After the fire she tried to file on her insurance only to find out she didn’t have any. She was also denied by FEMA because of the paperwork for ownership of the house was wrong. She was given $5,000 to help.

Karen Clark is a teacher at Williams Elementary, her husband Phillip is I construction. They have 3 children and just welcomed a grandchild born last week. Their home was a total; loss but with some help from FEMA they are rebuilding. She was given $5,000 to help the family.

Tiffany Dubose is a computer lab professional at Williams Elementary. Her home was a total loss in the Dyer Mill Wildfire on Father’s Day of this year. When the Tri-County Fire was declared a disaster the Dyer Mill Fire was not included. With no assistance from FEMA, her Christmas was made with a check for $5,000.

Kay Barr is a Deputy with the Harris County Sheriff’s Office. Her home burned to the ground in the fire. They had cleared the debris and set concrete forms for their new home when her husband Rocky, a retired police officer had a stroke. Even with the hardship she learned that SOS (Society of Samaritan) which formed in Magnolia to help fire victims was short on bicycles for Christmas gifts. Kay on her own went out and bought several bikes and donated them.  Kay received a check for $5,000. She said her home now called, “Ground Zero”, is at a stand still with forms up and waiting for rough-in plumbing until her husband recovers.

Cyndi Amendt of Magnolia is a receptionist at Magnolia Paint and Body. She has three children and four adults that were living with her when her home burned in Remington Forest. She was awarded $5,000.

Jennie Sulfridge is a sixth grade teacher at Montgomery Junior High. She has two young girls. Her home was a total loss in Remington Forest. Santa’s Elves gave her $5,000.

Greg Carmona is a landscaper. Work had been slow due to the drought. His wife Christy had a life threatening disease that she is recuperating from. They have six children. They received $7,000 from the program.

Jerry Robertson is a Tri-County firefighter who while fighting one fire he was notified his home was about to go up in flames. When he got there he had just minutes to collect a few things before the wall of fire consumed it.  He was able to get his child and wife who was pregnant at the time out safely. They were given $5,000.

David Lyon works for a Manufacturing company, his wife Kathy is a stay at home mom and homeschools her 10 children. Their house was a total loss and all the land around it which burned has not been cleaned up yet. They were part of the Dyer Mill Fire that was not declared a disaster when the Tri County Fire was declared. They had received clothes and food from SOS. Her and her children volunteered at SOS during the fires to help victims. Christmas came early for them with a check for $10,000

The Magnolia Volunteer Fire Department who ran virtually non-stop all summer long was also awarded a check for $5.000.

By night fall the elves had not finished their mission as they had two others to locate. 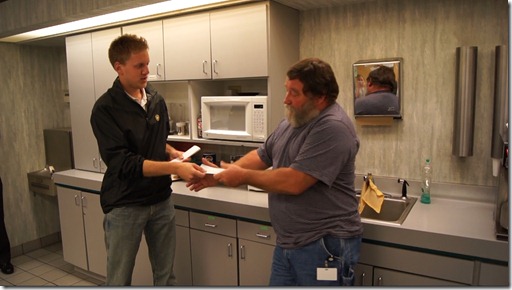