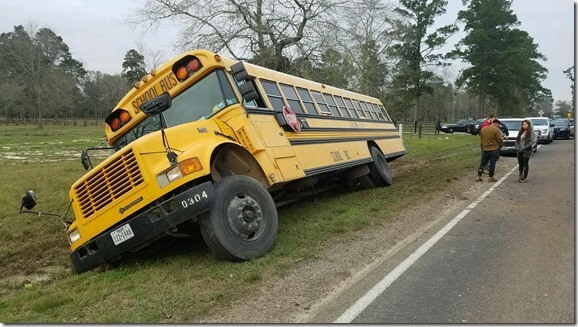 A Cleveland ISD bus with 65 occupants went into a ditch on its side around 4 p.m. Wednesday, when the driver apparently swerved to avoid a collision with vehicles in his path, according to Cleveland ISD Police Chief Rex Evans.

The bus, filled with intermediate school children, was traveling on FM 1010 near the intersection of CR 325, where Evans says the shoulders of the road were very muddy, contributing to the bus sliding and partially overturning onto the driver side. All 65 occupants were transported to the hospital in Cleveland to be checked out. A few were treated for minor injuries, but none were hurt seriously enough to be admitted.

As of this posting, Evans did not know if the bus driver would be cited.

“DPS is conducting the crash investigation for the school district,” Evans said. “Any time there’s an accident involving a school bus, I ask Highway Patrol to investigate.”

The last few students were about to be released from the hospital around 7 p.m.