A LETTER FROM A CITIZEN

We have an opportunity to cast a vote for increased safety in our community.  A yes vote for a "penny for protection" will provide desperately needed staffing and facilities that will enable our fire department to better serve our community.  Current staffing is at 2 persons per apparatus.  The nationally recommended standard is for 4 persons.  A yes vote will enable our fire department to increase from 2 to 3 full time professional firefighters per apparatus.  Fire fighting is an exceptionally labor intensive job.  Our local firefighters respond not only to fires in our community but all EMS incidents as well.  I speak from experience that when a critical patient needs care it can require many hands.  The American Heart Association recommends that persons doing CPR be changed every 2 minutes.  The effectiveness of an individual’s CPR diminishes after 2 minutes quite significantly.  This is another area where additional staffing is of critical importance.  A recent opinion article in the Conroe Courier states that a member of the Emergency Services District board opposes this vital vote.  Given that he is the police chief of OakRidge North I am appalled that he does not have any idea of what constitutes public safety.  My question is this?  Why does Oak Ridge North oppose this measure.  Could it be perhaps that they have their eye on capturing the sales tax revenue for their own in future annexation of areas surrounding their community?  It certainly appears that way.  Persons shopping in Oak Ridge North already pay 8.26% sales tax while the surrounding area in ESD8 pays only 6.25%.  The South Montgomery Fire Department has done wonders in the most recent ISO (Insurance Services Office ) evaluation.  As a result of their efforts we the homeowners can realize a small reduction in the cost of fire insurance for our homes.  (in some cases this can be several hundred dollars).  Notice that many of our subdivisions do not have fire hydrants for firefighting.  It is crucial that our fire department arrive on scene with enough personnel to effect life safety and property conservation.  The professional management is very conscientious with our tax dollars.  They protect an area of 50 square miles and a growing population of 53,000, in a district with an operating budget of $2,049,591.  Response numbers and area covered is comparable to the Conroe Fire Department which has more staffing and equipment.   Our money is not being mismanaged.  Additional information can be found www.mcesd8.org.  Our growing community needs more personnel and an additional facility to keep us safe.  Join me and my family in voting YES this Saturday! 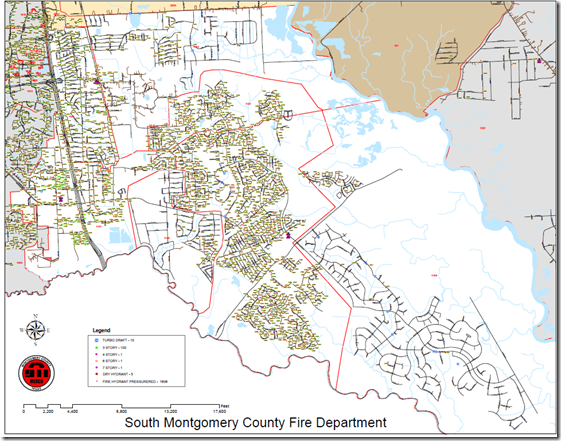 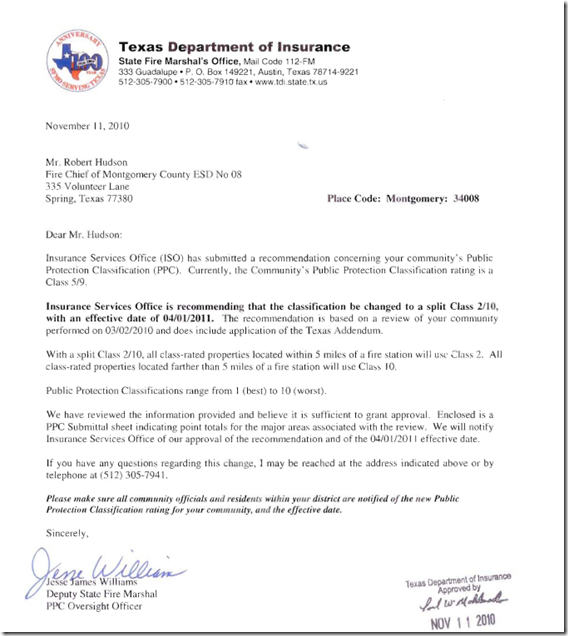 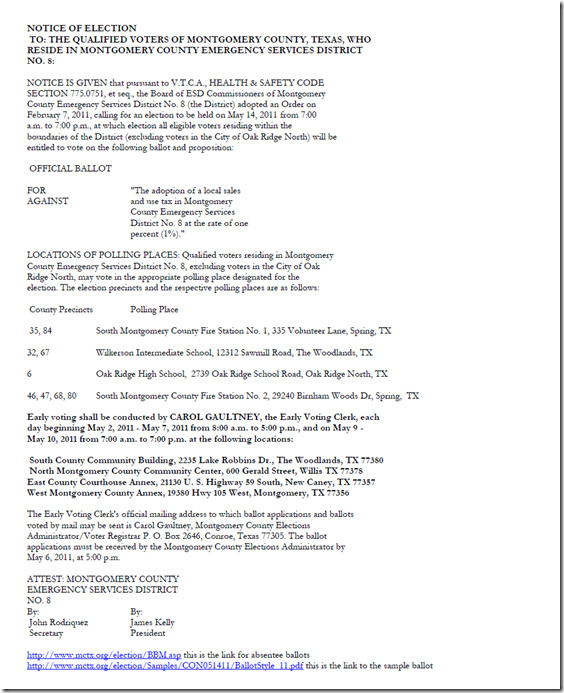 What is it the ESD is asking for in a sales tax?
An affirmative vote would increase the local sales tax within the District from 6.25% by one percent (1%) to 7.25%. This tax would not include the City of Oak Ridge North as they already collect a 2% sales tax in the City, the maximum sales tax allowed by Texas law at 8.25%.

What impact would it have on local residents?
Anyone purchasing taxable goods or services within the District (other than in the City of Oak Ridge North) would pay an additional one cent (1%) on each dollar of taxable goods purchased.

Why is the District asking for the sales tax?
The Emergency Services District has increased the levels of service over the last two years, and has provided all of the enhancements that can be provided by the ad valorem property tax.
The sales tax, if approved, would provide additional funding to build two new fire stations, replace a third (existing) fire station, and hire nine additional career firefighter positions (27 total firefighters) to reduce response times in large portions of the District, and enhance emergency service response capabilities District-wide.
Additionally, a sales tax shares the burden for emergency services funding from property owners alone to everyone that purchases taxable goods and services in the District.

How is the District currently funded?
Like all ESD’s in the State of Texas, Emergency Services District #8 can levy an ad valorem (property tax) not to exceed 10 cents per hundred dollars of home valuation.
Like a majority of ESD’s in Montgomery County, the District is currently levying the tax at the cap of 10 cents per hundred as allowed by law. What is the anticipated income from the sales tax?
Calculations provided by the State Comptroller estimate that a one percent sales tax will generate approximately $2.1 million dollars annually for ESD #8 fire department operations.

What is the current ad valorem tax rate in the District?
The current 10 cents per hundred dollar ad valorem tax generated $3,354,670.94 for administration and operations of the ESD #8 for the current fiscal year. Explain what an ESD is and what they do?
An Emergency Services District (ESD) is a governmental entity in the State of Texas and can levy an ad valorem (property tax) of up to 10 cents per hundred dollars of property valuation.
The ESD then uses those funds to ensure that quality fire and EMS services are provided within their defined District. This can be done by the ESD operating their own fire department or by contracting services with a third-party to provide services.

Are there other ways to fund fire services?
There are only two methods to provide funding for an Emergency Services District, ad valorem property tax and a sales tax.
Ad valorem taxes are capped at 10 cents per hundred dollars of property valuation. While sales taxes can be approved at levels between one-eighth to two percent. Montgomery County ESD #8 is asking for only one percent of the two percent currently available. That leaves one percent available should another municipality request it at a later time.

How did the ESD determine the amount of sales tax rate they are asking for?
Fire department staff and ESD Commissioners studied the current and future funding needs of the department to ensure that emergency response capabilities are able to keep up with population growth and service demands.
After calculating the projected costs of constructing additional fire stations, replace an existing station, adding fire apparatus to assign to those stations, and the ongoing cost of career fire fighters, the ESD Board determined that the one percent sales tax was the appropriate amount.
One decision impacting the choice was the realization that another municipality within the District may request the remained of the available sales tax for future economic growth. The ESD Board request leaves that additional one percent tax available should another municipality ask voters for approval of that funding.

Aren’t some of these planned changes more of a onetime expenditure?
While a majority of these projects (construction of the first fire station, Station 11-4, purchasing of apparatus to put in that station, and additional staff to operate in all the stations) will begin during the fiscal year following the election, they are all long-term expenses.
The fire station construction projects (three stations) will be financed for 20-years. The fire apparatus purchased to be assigned to those fire stations will be financed for a period of 10-years.
The personnel costs for the staff to increase the current daily staffing from 10 daily staffing of firefighters to 19 daily staffing of firefighters is an annual on-going cost.

Is this a good time to ask for more funding with the economy just starting to rebound?
If you poll people, most will likely tell you there is never a good time to ask hard working citizens to reach deeper into their pockets and provide additional money to support fire services. However, the provision of high quality fire and EMS first response is related to the funding levels available to provide the service.
Our District has seen significant growth, and is continuing to grow. According to 2011 statistics from the Houston Chronicle, between the 2000 Census and the 2010 Census, the west-side of our District (zip code 77380) grew by 19%, the north-side (zip code 77385) grew by 75%, and the east-side of the District (zip code 77386) grew by 176%.
As a result of this rapid growth, there are increased service demands placed on the fire department. Also, as new residential communities are developed, they are being built further from existing fire stations, impacting response times negatively. The increase in population also increases the probability of multiple calls for service at the same time. The fire service needs to grow as the community it protects grows to be able to provide appropriate levels of response.

“A PENNY FOR PROTECTION”
Article by Mike Rudy
Thank you in advance for taking the time to read this note.
You are probably aware of the “fun and excitement” we had in our neighborhood last weekend. The incident burned 17 acres next to our subdivision, and noticeably close to 3 houses on White Oak Trail. THIS COULD HAVE AFFECTED EVERY HOME IN OUR SUBDIVISION!! “This could have been a real mess!”
Fortunately, the SOUTH MONTGOMERY COUNTY FIRE DEPARTMENT responded very quickly and handled the problem. They were REALLY GOOD!! This again “could have been a real mess.” Just think, IF they didn‟t show up, that FIRE could have easily made us look like West Texas. Did I happen to mention, that “this could have been a real mess?”
Point is, the South Montgomery County Fire Department is part of the “EMERGENCY SERVICES DISTRICT #8” we will continue to refer to this as MONTGOMERY COUNTY ESD#8.
HERE ARE SOME FACTS.
#1 This district is asking for some additional funding to bring their now under-staffed department to at least the MINIMUM REQUIRED PERSONEL to operate the Fire Fighting Apparatus. This means they now have ONLY 2 guys on those BIG Trucks, when there should be at LEAST 4. It also means that if your house was in flames, they would have to wait until another truck (with 2 guys) showed up, BEFORE they got after their job of fighting the fire. NOT GOOD. Did I mention that “this could be a mess”?
#2 In our LOCAL district, WE are only paying 6.25% SALES TAX on goods and services. (i.e. „beer, ice. GAS, worms & minnows‟). “DISTRICT” being generally West of the San Jacinto River, and south of the Lake Woodlands Exit along I-45. and down toward Benders Landing. …….THAT INCLUDES US……..
#3 This “PENNY” increase would CATAPULT our rate to a Whopping 7.25%. Which by the way, is STILL LESS than what WE are paying anywhere else you shop.
LET’S SEE WHAT THIS WILL GIVE US?
We have just received an upgrade from 5/9 ISO rating, to a # 2 rating, with # 1 being the TOP Rating. Call your homeowners insurance company. NO joke, it happened. There‟s money back in your pocket. And MORE than a Penny, I Betcha..
MORE IMPORTANTLY, the plan is to add as many as 9 more people (fire fighters) per shift. And has plans to open STATION 4 & 5, and replace OLD station #3.
Here‟s the CLINCHER. This “stinkin” PENNY, will provide US with SUPERIOR FIRE PROTECTION at NO DIRECT ADDITIONAL COSTS TO PROPERTY OWNERS. PLEASE REPEAT THAT!! NO DIRECT ADDITIONAL COSTS TO PROPERTY OWNERS. THAT’S US BOYS & GIRLS! PLEASE grasp this concept, “ALL THE PEOPLE THAT LIVE IN APARTMENTS, AND HOME RENTERS, and people SHOPPING in the stores, at the local “stop and robs” will HELP PAY THEIR SHARE for the protection. …….. THIS IS HUGE!!!!
YOU ASK…HOW CAN I HELP??????”…SIMPLE…“VOTE”…EARLY…EARLY…EARLY
2235 Lake Robbins, South County Community Bldg.
May 2nd thru 7th 8-5PM and MAY 9TH & 10th 7-7PM
Actual Voting Day is May 14, (but, who wants to stand in line??) Remember, we are only voting on the ESD #8 Deal & and you WILL have to figure out where to vote on this day.
Fact: Last May this PROPOSITION was defeated by only 9 votes, where only 300 voters out of 22,000 voted. This forced Montgomery County to raise the PROPERTY TAX 10 cents per $100. Get the operative word?
PROPERTY TAX….YOUR VOTE CAN MAKE THE DIFFERENCE!!
Probably the only time it ever will!!!!!…
If you have any questions OR comments please contact me:
Mike Rudy [email protected]
Mike is also looking for people to help him spread the word about the vote and
why it is so important to vote YES.
Please contact him if you are interested in helping out in any way, shape or form!