Zachary Taylor Hales, 21, of Splendora was travelling southbound on Huff Road early Sunday morning when he drove off the left side of the roadway. He then over-corrected, crossed the road, and struck a large tree. The impacted ripped the right wheel off of the vehicle and caused the truck to flip and ultimately eject Hales.

There is very little traffic on that roadway and it is believed that the accident was several hours old when a passerby happened upon the scene and reported it. Montgomery County Hospital District and Splendora Fire Department were dispatched to the scene at 5:43 a.m.

Hales was pronounced dead at the scene by Judge Metts who was requested at the crash by DPS. Metts also ordered an autopsy and for Eickenhorst Funeral Directors to transport Hales to the Montgomery County Forensic Center.

The accident was investigated by DPS Trooper Evans and Sergeant Leitner who believed Hales to have been traveling at a speed greater than the posted 30 miles per hour when the crash occurred. He was not wearing a seat belt.

EMC Wrecker Service removed the vehicle from the scene. 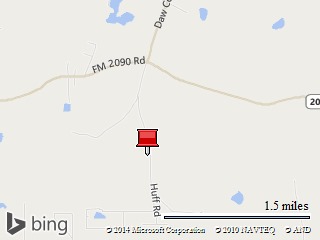