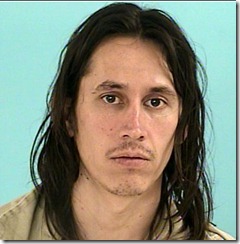 Ruben Alejandro Reyes, one of Montgomery County’s original Top 10 Most Wanted DWI Offenders as listed on the District Attorney’s website, was sentenced Thursday to 7 years in prison for two counts of Intoxication Assault in the 284th District Court.  Intoxication Assault is a 3rd Degree felony with a punishment range from 2 to 10 years in TDCJ.  Because the offenses are intoxication related, the judge had the option to stack the sentences.

According to prosecutor Andrew James, facts at the hearing showed that on September 29, 2008, Reyes was driving north bound on the US 59 feeder road when he crashed in a construction zone.  The roadway of US 59 was being expanded and improved at the time of the crash.  James stated that Reyes drove past several construction barriers and down into the construction site.  After traveling on the roadbed for a little over 1000 feet, he struck a section of the new concrete roadway at a high rate of speed.  Jaciel Reyes and Carlos Reyes, brothers of Ruben, both sustained serious bodily injury as a result of the crash.  Carlos Reyes was taken by ambulance to Memorial Hermann of The Woodlands, while Jaciel Reyes was life-flighted to the Texas Medical Center in Houston.  Carlos Reyes has since recovered from his injuries; however, Jaciel Reyes is essentially in a permanent vegetative state.  Sgt. Dean Barnhill of the Texas Department of Public Safety investigated the crash and determined that Reyes was intoxicated.  A sample of Reyes’s blood taken at the scene showed a BAC of 0.24 or three times the legal limit.

On Monday February 14, 2011, Reyes pled guilty to both counts and requested that he be sentenced by Judge Cara Wood.  At the sentencing hearing, Reyes’ family all asked that the defendant receive the minimum sentence, 2 years in prison, and told Judge Wood that they have all forgiven him for the devastation he caused their family.  Prosecutor Andrew James requested that the defendant receive a sentence near the maximum allowable by law in order to deter others from making our roadways dangerous by driving while intoxicated.  James also stated that this case is one of the most serious cases for this type of a case because of the serious nature of the injuries.

Judge Wood sentenced Reyes to 5 years on Count I for Jaciel Reyes and 2 years on Count II on Carlos Reyes.  She then ordered that the sentences be served consecutively or stacked.  As a result of the judge’s cumulating order, Reyes will most likely have to serve the entire seven years before he is released.  Reyes will likely be released to the US government after completing his sentences since these convictions will affect his status in this country.  James stated that the defendant played Russian Roulette with drinking and driving that night and lost and that this sentence by Judge Wood is a reflection of the serious impact these crimes can have on victims and our community.  District Attorney, Brett Ligon, stated that he was pleased with the sentence and that these cases deserve attention in this county because of the threat impaired drivers create to all of us.  Ligon also asked that if any citizens are aware of the location of any top ten DWI offender to please call the sheriff’s office or Crime Stoppers.  The top ten list can be found at www.mctxdao.org by clicking on “Top Ten DWI Most Wanted” and the list is currently being updated. 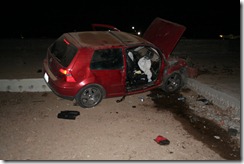 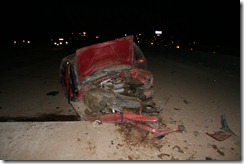 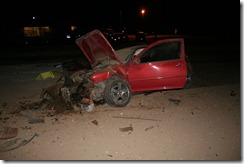