Some of the dry weather has ended for one night. However we are still in need of over 7 inches of rain to be at a point where the fire hazard diminishes. The Montgomery County Burn Ban remains in effect.

Last night just after 10pm a line of severe storms passed through Houston County. Two tornados struck  in the area of Crockett. The first two were near the town of Wells, the other two not far away near Oakwood.

A few homes were damaged. There were no injuries from the tornados themselves but there was from trees down in the area.

A couple  from Florida driving westbound on SH21 just outside Crockett struck a downed tree. That tree penetrated the vehicle between the right front fender and front passenger door. It continued through the vehicle exiting the drivers side rear door. The female passenger was transported to a Crockett Hospital in critical condition as it severed her leg. The male driver was in stable condition. DPS did transport him to the hospital for a mandatory blood draw.

A lot of straight line wind damage was done in the area with many of the trees stripped of their leaves. 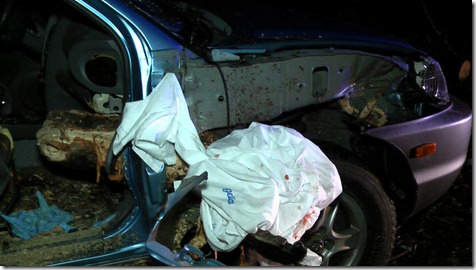