On July 5, 2018, a deputy with Constable Mark Herman’s office conducted a traffic stop on a vehicle in the 16000 block of Hollister Road for displaying a fictitious paper plate. The driver was identified as William Molano and it was discovered that the vehicle was a salvage vehicle which is unlawful to operate on a roadway.

A salvage vehicle is a vehicle that has been deemed unrepeatable and has no value other than a source for parts. These vehicles are then issued a “Salvage Title”. Salvage titled vehicles have not passed a vehicle safety or emissions inspection and cannot be driven on a public roadway.

Investigators with Constable Mark Herman’s Emissions Task Force Unit conducted an investigation involving the sale and use of the salvaged vehicle and later discovered that Molano knowingly purchased the salvage vehicle from an auction and reproduced a dealer plate and affixed it to the salvage vehicle.

“William Molano has been charged with Permitting the Operation of a Salvage Vehicle on a Public Highway and Unauthorized Reproduction, Purchase, Use or Sale of Temporary Tags. He received No Bond out of County Court 01. If you have any information regarding his whereabouts, you are urged to call our dispatch or your local law enforcement.” – Constable Mark Herman 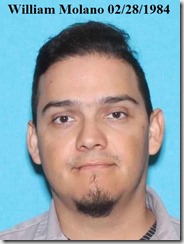