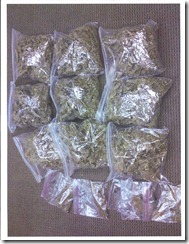 Sergeant Cooke who is trained in criminal interdiction was patrolling U.S. Highway 59 just south of the Washington Avenue exit when he noticed a red Honda 4 door passenger car traveling northbound on highway 59 with an unreadable license plate.

When Sergeant Cooke made contact with the driver he could smell the odor of burning marihuana coming from inside. That being probable cause for a search, Sergeant Cooke found a backpack on the front passenger seat which contained a small plastic baggie with marihuana inside and a glass marijuana pipe.

Amanda Hardegree was arrested for Possession of Marijuana, 3rd degree felony which is punishable by imprisonment in TDCJ for 10 years, or no less than 2 years, and a fine not to exceed $10,000.00.