After picking a jury Monday morning the trial of Alejandro Guzman-Lopez started. Guzman is accused of being intoxicated on alcohol and drugs and then driving. As he traveled at a high rate of speed as he was northbound on US 59 just south of FM 2090. It was there he changed lanes and slammed into a Ford Explorer driven by Brad Frazier, 21 of Splendora. With him was his 21-year-old wife of five months Shea, and their two children age 2 years and 5 months. The impact caused the Frazier vehicle to flip multiple times.

Shawn Knight and his wife were northbound and saw the crash. He said the Guzman-Lopez’s car spun around several times after the impact. Knight stopped his car and got out as many others were doing. He instructed his wife to call 911. He then witnessed Guzman-Lopez get out of the vehicle and try to retrieve a cell phone. Lopez then ran to the Frazier vehicle, circled it and ran toward the open field. He was then tackled by another witness and held for police.

Knights wife can be heard on the 911 tape as she could be heard several times repeating, “Oh my God, oh my God”. That’s when she realized the Lopez took off running. Knight said others were running to the car but with the scene unfolding in front of him he had no strength to approach the scene.

Raquel Arzola testified she was on the way home to Cleveland with her 13-year-old daughter after seeing a movie. She was in the right lane and saw Lopez approaching at a high rate of speed so she went to the middle lane just as he past her. The next thing she saw was the Ford SUV flipping. She said she got out of her vehicle and started praying. She said it appeared to be a baby hanging out of the window covered in blood. She also witnessed Lopez run from the scene.

Jeffrey Bratton was leaving his Splendora home on the way to Archie’s in Splendora to buy groceries. He turned off Ipes Road onto the feeder of US 59 when he saw the crash he sped up to get to it. He first ran to the passenger side off the vehicle and said it looked like the female passenger was gone. He did cut her seatbelt off her to take the pressure off her chest. He then went around to the drivers side. The children had already been removed from the car.

Brandon Brooks was also passing by and saw the crash. He ran to the car and peeled the rear door open to get the children out. His fiancé testified she had spent the day at Splashtown with her daughter and a friend when they saw the crash. Her fiancé Brandon handed her the child in the car safety seat. She said the infant was traumatized and not making a sound. That’s when she spotted a small dog in front of the vehicle which appeared to be injured as it was holding it’s leg up and had blood on it. She realized it belonged to the family and handed the child the dog. Immediately the child perked up and started to cry as she held her puppy.

Ed Theirbach is a Paramedic with the Montgomery County Hospital District. He is also a pastor. Ed started his career in the Air Force as an Air Traffic Controller in Alaska. He moved to the area and has been a pastor for 33-years. After Rita and Ike and talking with firefighters he decided to become more involved. He said he could drive an ambulance or fire truck but beyond that didn’t know what to do. On his own imitative he went back to school and got his Paramedic Certificate.

Theirbach and his partner Sammy Hancock were working a 24-hour shift that day in Splendora just seconds from the crash scene. The y were dispatched at 7:08pm and arrived at 7:12pm. He first went to the passenger side and confirmed Shea Frazier was deceased. His partner went to the driver side where Brad was conscious but critical. Brad told Hancock, “I’m Brad and please take care of my babies.” They started to work on him as they waited the Fire Department arrival to extricate them as they were trapped in the vehicle. When they finally removed Brad Frazier they got him in the ambulance and started to work with him. Frazier’s lung was punctured and his chest cavity filling up with air. After releasing the air they continued to work on him as he was conscious and talking but in pain. On the way to Memorial Hermann Hospital in Houston which is a Level One Trauma Center, Frazier went into traumatic arrest. CPR was initiated and continued at the hospital but he passed away.

Brad Ward was a Paramedic Supervisor at MCHD Station 12 in Cut N Shoot. Due to the calls coming in they were also dispatched. Just as they arrived on the scene they were disregarded as Shea was deceased. Ward made the decision to stay on the scene and seconds later a witness came to him and asked if someone had looked at the children. This was the first he had heard children were involved and went to the children. Both were still strapped in the car seats with minor abrasions. He said the way the child seats were placed and sized was the main reason the children escaped serious injury. The fact that witnesses did not remove them from the seats was even better in that if they were injured it could have made it worse. Ward said he had to work on the toddler around the puppy. She would not let go of the puppy and the puppy would not let him remove it from the toddler. Eventually since they were going to transport them to Memorial Hermann in Houston, the puppy had to be removed and it was given to a passerby who actually owned the dog and was a friend of the family. Ward said, had it been a local hospital he may have bent the rules a bit and transported the puppy with the child. He knew one of the nurses at one of the receiving hospitals would take care of it until someone could retrieve it.

Ward said the children just had abrasions but he was tasked with driving as his partner Lori, who had just returned from maternity leave would not part with the children in the back. 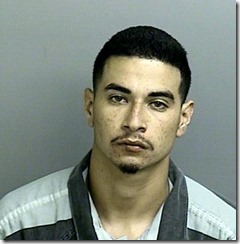 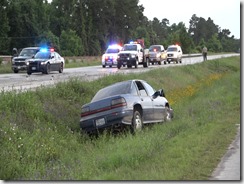 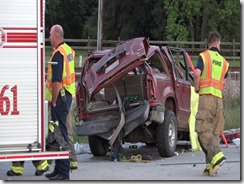 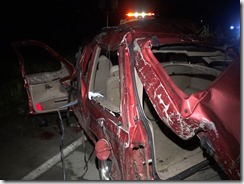 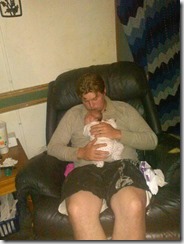 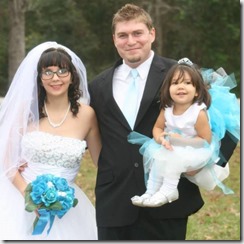 ATTACHED IS THE 911 TAPE FROM THE CALL THAT LASTS ABOUT 20 MINUTES. LISTEN TO THE FRANTIC CALLS AND HOW DISPATCHERS HAD TO HANDLE SUCH A CALL VOLUME WITH THE RESOURCES THEY HAD. ALSO NOTE HOW IMPORTANT YOUR LOCATION AND DIRECTION OF TRAVEL IS. CALLS CAME IN FOR THE CRASH BETWEEN CLEVELAND AND ROMAN FOREST, BERTWEEN SHENANDOH AND SHEPHERD. ALSO THE DIRECTION OF TRAVEL AND IF IT IS FREEWAY OR FEEDER.