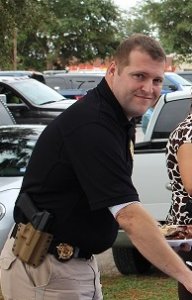 Liberty County Pct. 1 Constable Justin Johnson was critically injured by the driver of a red pick-up truck when the driver ignored a line of stopped vehicles at a “park and ride” lot on Hwy. 146 three miles south of CR 1413, then drove through a barricade at a high rate of speed on the shoulder of the road and hit, head on, one of four Sheriff’s unit with all the emergency lights activated. After hitting the Sheriff’s unit, the pick-up truck spun around sideways striking Constable Johnson knocking him into the air causing him to strike his head on the pavement. The rear wheel then passed over Constable Johnson.

Deputies and Constables have been working this intersection for well over a year both in the morning and evening hours to permit employees of a construction company to enter and leave the traffic flow on Hwy. 146 safely and anyone who travels this route should be familiar with the traffic conditions and traffic control efforts at this intersection. There were six law enforcement personnel working this intersection with all units having their emergency lights activated when the wreck occurred. Constable Johnston was transported to Herman Hospital in Houston via Life Flight with critical head injuries. The male driver of the pick-up truck and his 8-year-old daughter were also taken by Life Flight to Herman with what was thought to be non-life threatening injuries. As of 3:am this morning, Constable Johnston was listed in critical condition after undergoing surgery at Herman Hospital. He is presently in ICU and being closely monitored by medical staff, his wife and other family members.

The Department Of Public Safety is handling the crash investigation and has all information regarding the drivers name, medical condition, possible pending charges and, hopefully, with time, can determine why someone would completely disregard all traffic control precautions and run over law enforcement personnel who were trying to control the traffic flow for the safety of others.