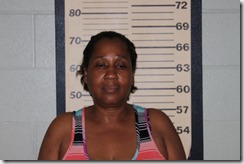 On Saturday, April 4th, 2015 Cleveland Police Officers were dispatched to 831 S. Hwy 59 (Wal-Mart) in regards to a theft in progress. Loss prevention personnel advised Cleveland PD Dispatch the person who was stopped for allegedly stealing was refusing to cooperate and fled the scene leaving in a black Chrysler PT Cruiser. Officer Erica Fleming observed the vehicle fleeing the scene at the corner of US 59 and Highway 105. Officer Fleming activated the emergency equipment of her patrol unit. The driver stopped in the Whataburger parking lot. The driver then sped from the parking lot as Officer Fleming, Officer Silva and Officer Ibarra pursued the fleeing vehicle. The Officer were able to box in the driver at the corner of Highway 105 and Loop 573.

The driver was identified as Monsella “Marcella” Bass Robinson Charles (age 55 of Cleveland), she was arrested for Theft “Class C” and Evading Arrest “State Jail Felony”.