The very elusive efforts of 40 year old Craig Howard Castilaw to avoid arrest on outstanding warrants from the Liberty County Sheriff’s Office came to an abrupt halt on Thursday at about 10:am when he was arrested by Deputy John Tucker and several assisting Sheriff’s Deputies. Deputy Tucker, who had prior associations with Castilaw, made arrangements with him to meet in the Dayton Oaks Sub-Division near this home on CR 2339 where Castilaw was arrested on an outstanding “blue warrant” for Parole Violation and another warrant for bond forfeiture on a Driving While License Suspended charge.
Liberty County Pct. 4 Constables Office was also looking for Castilaw on possible drug charges but at this time Craig Howard Castilaw is located in the Liberty County jail booked, according to arresting Deputy Tucker, on the two outstanding warrants from the Sheriff’s Office. Other possible charges may be pending. Sheriff Bobby Rader wishes to thank all those who may have assisted in Castilaw’s arrest after avoiding law enforcement for almost two years on these warrants. 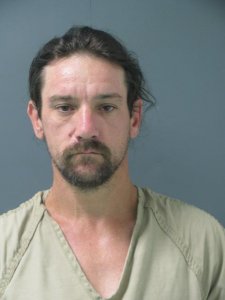