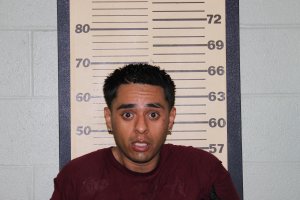 On Wednesday, October 18, 2017 at approximately 9:59am Officer Charles Ortega was patrolling Harding Avenue when he observed Jose Santos Venegas (age 25 of Cleveland) standing at a residence located in the 200 block of Harding Avenue. Officer Ortega was aware Jose Venegas had been indicted by a Liberty County Grand Jury for Evading Arrest with a Vehicle from charges previously filed by the Cleveland Police Department.

“Officer Ortega’s performance throughout this incident was outstanding. From his spotting the wanted subject to his eventual apprehension. We have had several instances where an apprehension was attempted for Mr. Venegas in the past with no avail. Officer Ortega’s determination is what eventually led to the arrest. I have to give kudos to Officer Ortega for his apprehension of this wanted person!” (Captain Felts)

The Cleveland Police Department would also like to thank the Liberty County Sheriff’s Department, Cleveland ISD and the Department of Public Safety for their assistance.