A crash involving a motorcycle and a truck pulling a boat. The driver from Willis passed away on the scene. The passenger, his wife was flown to Hermann Hospital where she passed away.

Texas Department of Public Safety normally works these crashes involving a fatality. If it happens within the city limits the local police must work it. However, in almost all incidents such as this DPS will assist them and guide them through it.

The comments made this morning by Onalaska Police Department officer Bryan Perkins who worked the crash was, “I am still working on the report, I have been told not to release any other information”. He continued to say it would be at least a week before information was available.”

Names are not officially being released by them, the information on the truck driver. How the incident happened. Also if the pickup driver had the state mandated blood draw done to rule out alcohol or any other substances n his body.

We will continue working on this. We do have the names but until I have something official from them I will not be releasing them. 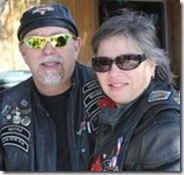 Tim and Madonna Gautreau were well known through the Harley riders and the Cut and Shoot HOGS group.