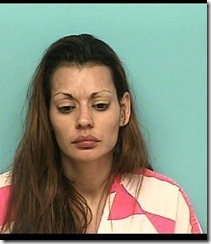 Jennifer L. Harden has been sentenced to 8 years in the Texas Department of Criminal Justice for intoxication manslaughter in the crash that killed John McSwian, 41, of Spring last year.

Just as the clocks went from 2 a.m. to 3 a.m. on March 10, of last year, MCHD and South Montgomery County Fire Departments received a call for a major accident on Birnham Woods Blvd. at Riley Fuzzel Road in Spring.

When crews arrived they were unable to locate and accident scene but began a search of the area. Moments later they discovered a vehicle fire approximately one and one-half miles north of the dispatch location. In addition to the fire was a motorcycle on the ground which had hit the vehicle head-on. The driver of the 2003 Swift motorcycle was identified as John McSwain, 41, of Spring. McSwain was thrown approximately 100 feet and did not survive the crash.

DPS Troopers investigating the crash spoke with the driver, Jennifer Harden, 35 of Spring. As they talked with her it was determined that she was on the wrong side of the road and was intoxicated. She told troopers that she had been looking at her GPS.

According to DPS Trooper Reece, Harden was southbound in the northbound lanes of Birnham Woods. McSwain who was northbound struck Harden head on.

The Montgomery County District Attorney’s Office Vehicular Crimes Unit responded to the scene and it was determined that the driver of the Scion be placed in custody for intoxication manslaughter. Troopers worked through the rains finishing the scene investigation approximately 7 a.m..

Hardin blew a .167 on a portable breathalyzer on the scene. She also refused a blood draw. A warrant was issued for that blood draw which resulted in .149 almost double the legal .08 limit.

In addition to the 8-year-sentence a finding of a deadly weapon, the vehicle was found. With this, she will not be eligible for parole for at least 4 years.