Texting Judge Not LOL– Coker is OUT! 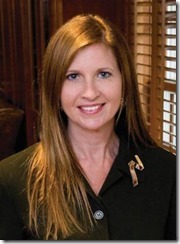 Elizabeth E. Coker may forever be known as the “texting judge,” but her notoriety will soon be all that is left of her days on the bench of the 258th District Court of Polk, Trinity, and San Jacinto Counties. Coker signed an “AGREEMENT TO RESIGN FROM JUDICIAL OFFICE IN LIEU OF DISCIPLINARY ACTION” with the State Commission on Judicial Conduct.

According to the terms of the agreement, Coker was to send a formal letter of resignation to Governor Rick Perry on Monday, stating her resignation will be official December 6. Until then, she has agreed to take a leave of absence, and will cease to perform any duties connected with her position. As of December 6, the third-generation Texas judge is officially and permanently stripped of all judicial power, and is even prohibited from performing a wedding.

The agreement comes in the wake of a recent investigation revealing Coker texted instructions from the bench to a Polk County Assistant District Attorney who was assisting in the prosecution of a case in Coker’s court. But the agreement not only outlines that impropriety, it suggests the State Commission on Judicial Conduct had far more evidence against Coker.

“…the Commission investigated claims that Judge Coker allegedly engaged in other improper ex parte communications and meetings with Jones, other members or the Polk County District Attorney’s Office, the San Jacinto County District Attorney, and certain defense attorneys regarding various cases pending in her court; Judge Coker allegedly exhibited a bias in favor of certain attorneys and a prejudice against others in both her judicial rulings and her court appointments: and .Judge Coker allegedly met with jurors in an inappropriate manner, outside the presence of counsel, while the jurors were deliberating in one or more criminal trials;”

The agreement, signed by Coker on October 19, further suggests the Committee believes she committed additional indiscretions during the course of their highly publicized investigation.

When Coker became the 2012-2013 board president of the Baylor Alumni Association, she gave an interview published on that organization’s website and responded to a question regarding how her background in law might be reflected in her handling of that board position. Ironically, Coker is quoted as saying, “I suppose, being a judge, I try to fully analyze every side of an issue before making a decision.”

The Polk County prosecutor involved in the texting scandal is identified as Kaycee Jones, who became 411th District Judge on January 1. Jones had Coker administer her oath of office. After the texting allegations emerged, Jones admitted her participation, acknowledging it was wrong and apologizing.

Whether the “Statement of Facts in Support of the Commission’s charges” are ever made public or not, Elizabeth Coker’s name will no longer be preceded by the words, “the honorable.”

Below is the full agreement between Coker and the Commission. 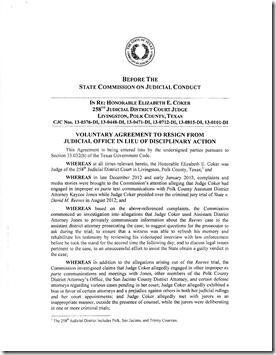 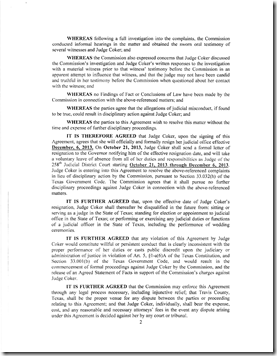 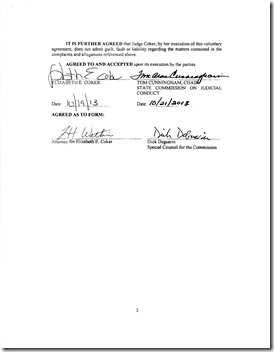 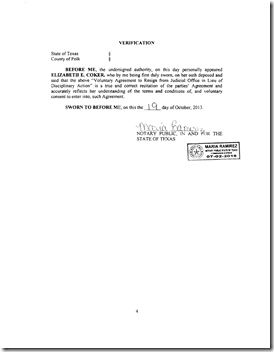 7 thoughts on “Texting Judge Not LOL– Coker is OUT!”